It’s La Mercè in Barcelona and almost everything is closed.  Who would have thought!?

For those of you who may not know La Mercè lasts for around 5 days and is a street festival held in honour of Mare de Deu de la Merce, the Patron Saint of Barcelona.  The festival, which officially first took place in 1902, bids goodbye to the summer with a bang and welcomes in the cooler months of autumn and Barcelona holds the largest street party.

How fortunate that the celebrations are at the same time that I will be celebrating my birthday!

It is Monday and the day promises to be a hot one.  We head to the Barri Gottic, the area that is also known as the Gothic Quarter and in which the old town of Barcelona is situated. The streets vary considerably in style but the old quarter is generally characterized by narrow cobbled streets with tall old buildings. 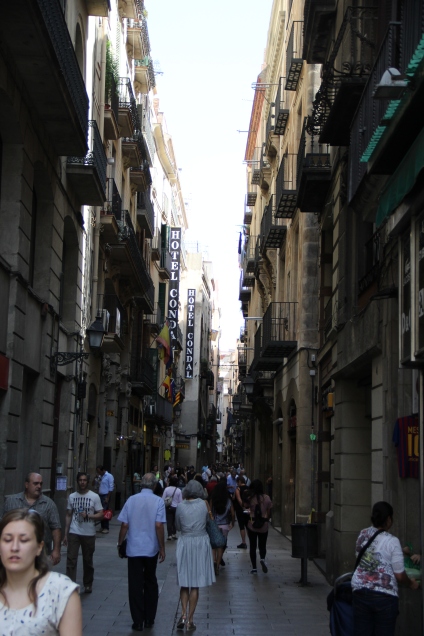 Narrow streets of the Bari Gothic

Picasso lived and worked in Barri Gotic from 1895 to 1904 and Joan Miró was born and lived here during his youth.  Barri Gotic is situated on the right hand side of La Rambla as you look toward Plaça de Catalunya. For those of you who have not strolled along La Rambla, it is the famous walkway that is considered to be the very centre of Barcelona. 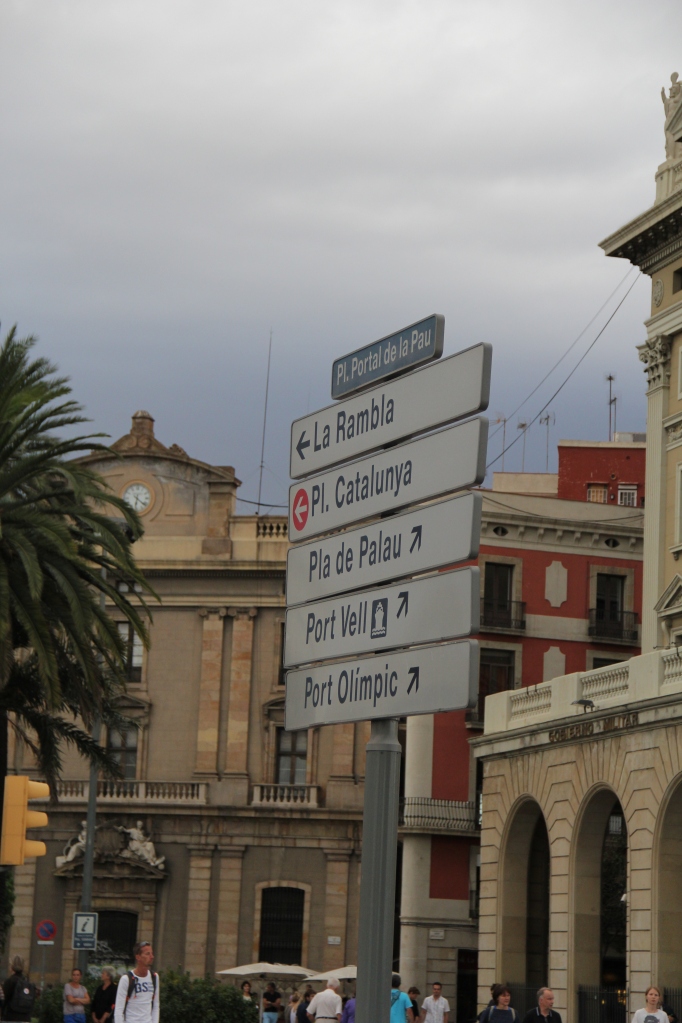 Here you will see all sorts of stalls, restaurants, bars and street performers along with thousands of people that promenade up and down until the early hours of the morning. 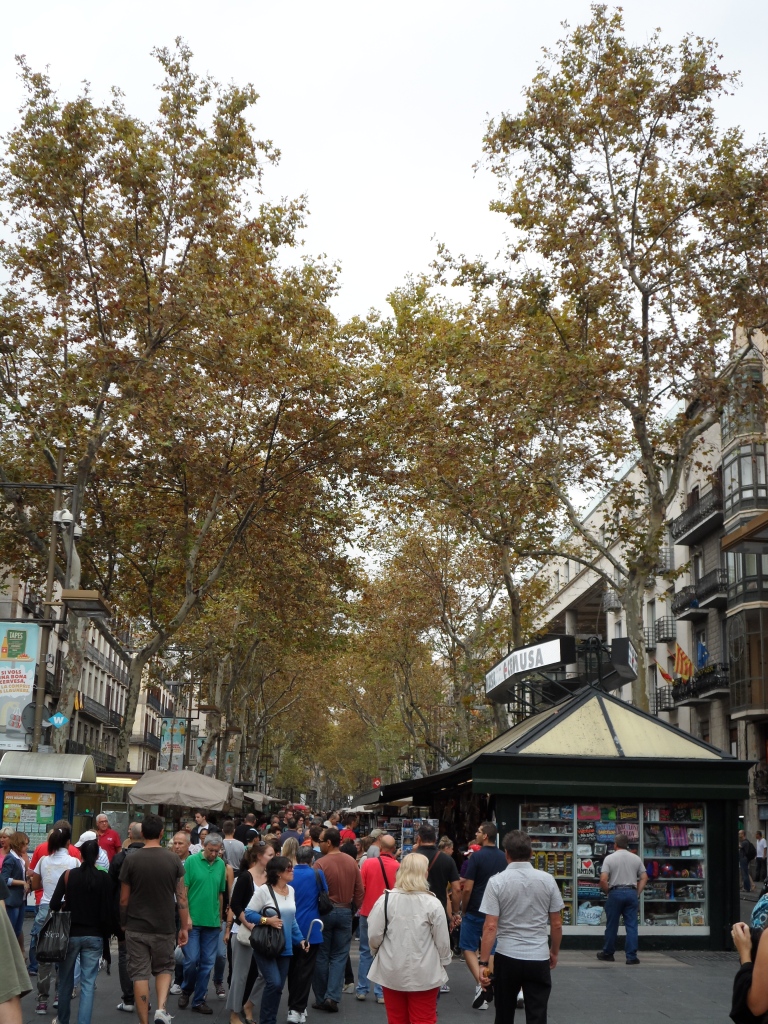 At the base of La Rambla

The square is filling quickly with people and we are fortunately on the side with shade. It is well worth getting to the square early as thousands of people will soon fill the space. 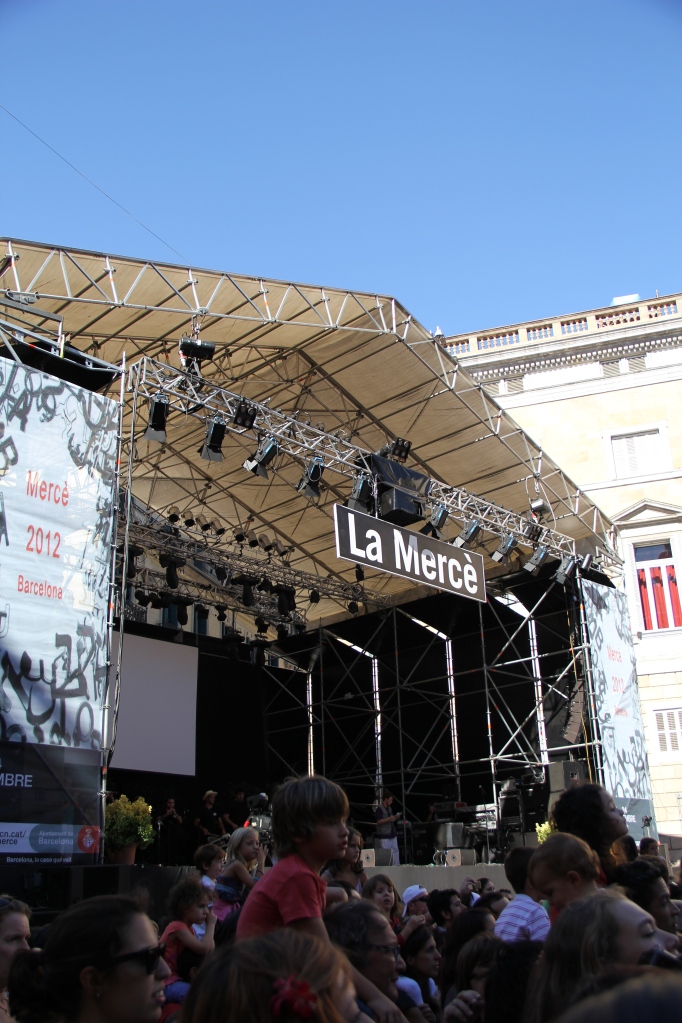 The stage in the square

The Gigantes (Giants Parade) is a very popular event for the whole family although I strongly suggest keeping to the edges of the square if you have very small children and strollers. Huge giant effigies of kings, queens and nobles will perform traditional folk dances with their partners. These huge figures tower above the crowds and spin around and around so the crowds can see them in all their glory. Once each pair of Giants have performed their dance and the mayor appears on the balcony, they will march through the streets of Barcelona accompanied by small percussion groups that beat out a rhythm on drums and chant or sing their traditional songs. 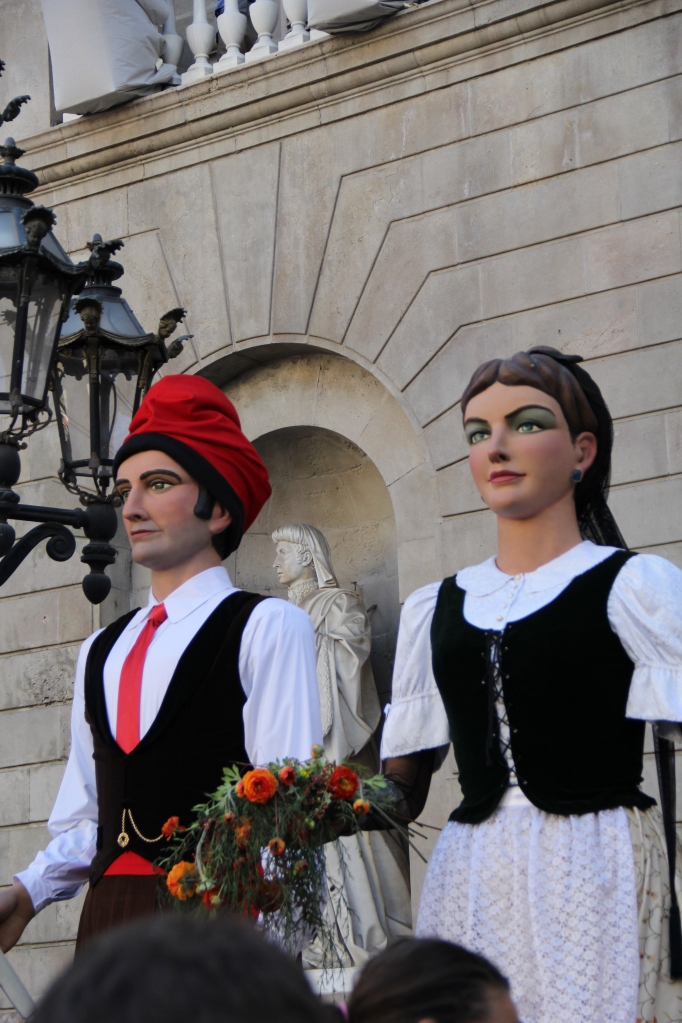 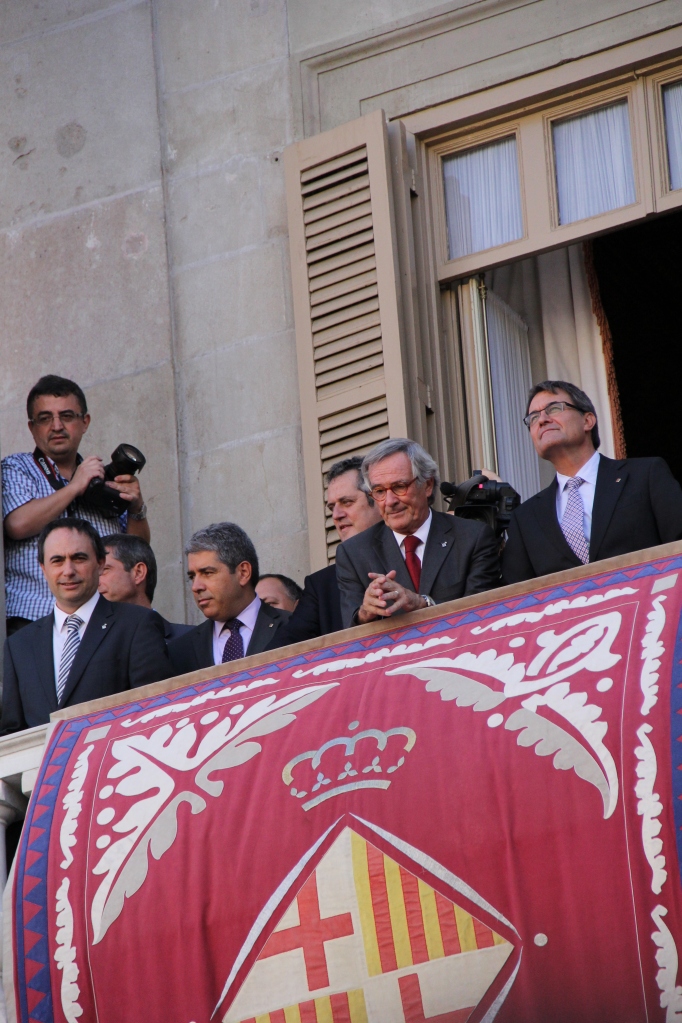 Among the many festivities, the Castellers (Human Towers) are the most popular.  This is one of the highlights of the festival and takes place in Plaça de Jaume. The aim of the Castellers is to build a human tower and have a young child climb to the very top and stand up. It requires a tremendous amount of planning and teamwork and it is quite an amazing sight to see.  As each team is introduced, they enter the square, turn in a circle before the crowds and exit. 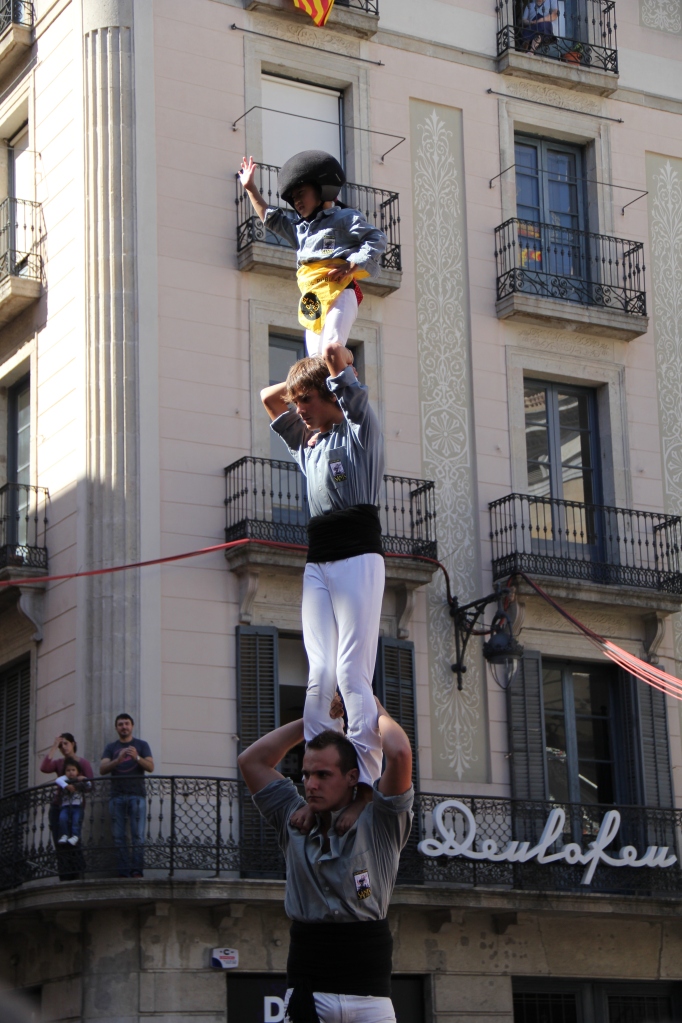 Next are the bigger towers.  Everyone is forced to inch out of the way so the bases for the big towers can be made. The Castellers are yelling at the crowds to move back, the crowds are yelling at each other to make room, children are beginning to cry, strollers are being pushed… it’s pandemonium but oddly also controlled chaos.  If you are the least bit claustrophobic, I suggest that you keep to the outer borders of the square.  The crowds are so thick that you can barely lift your arms to take photos.  The bases get bigger, the levels get higher, multiple towers are being formed and the children zoom to the top and cross from one side of the tower to the next before they slide back down.  What strength, what balance, how fearless, how exciting.  Fortunately, the children are wearing helmets but they don’t have safety lines.  If it did happen that someone fell, they certainly wouldn’t hit the ground. 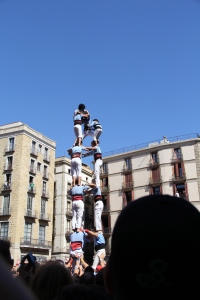 Time now for a well-deserved pitcher of sangria.  It’s thirsty work standing in a square for several hours packed with a jostling crowd.  Tapas et sangria it is as we make our way to Las Ramblas to watch the crowds and the Giants parade as it snakes its way through the streets.

I cannot get enough of the Croquetas:  Amazing little bites typically made with ham, fish, chicken or spinach in a sort of thick béchamel sauce that are breaded and deep fried.  It’s a wonderful thin outer crunchy layer filled with creamy goodness. 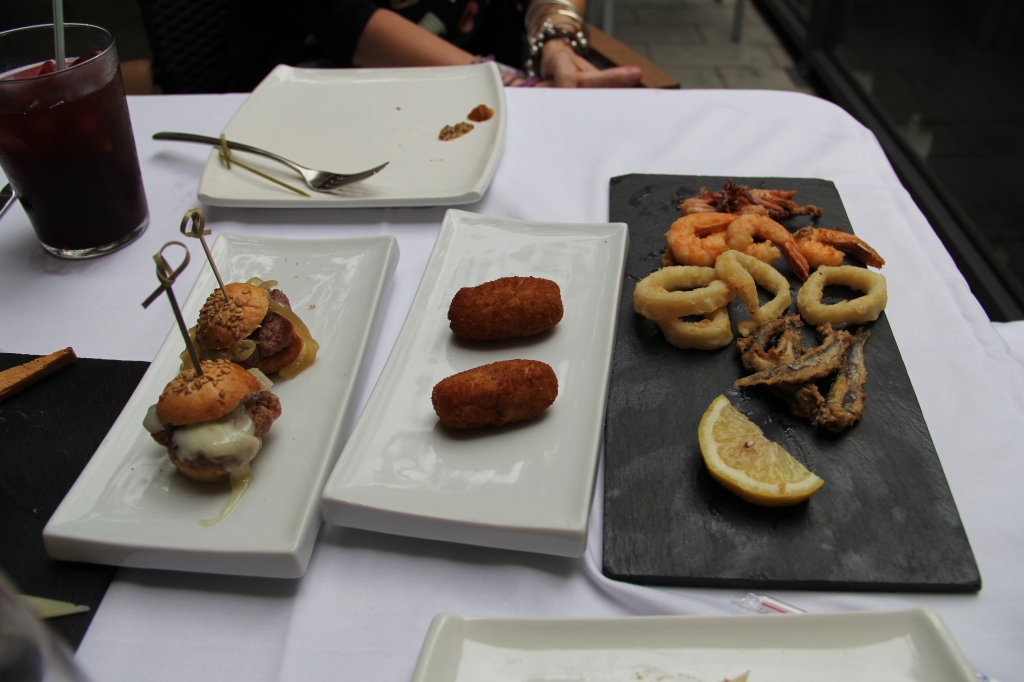 Chipirones: I have never seen these deep fried baby squids outside of Spain. They are tiny and you will receive a plate heaped with them.

And last but not least, another favourite of mine :

Anchoas fritas:  Tiny anchovies that are dipped in egg and dredged in flour then fried until golden. No bones (at least so tiny and thin you couldn’t really call them bones), no skin, no scales, no heads, no eyes, so thin and tiny that you can just pop the whole fish in your mouth.  They might be tiny but they pack a huge punch of flavor and not anything like the little rolled up salty versions that you will find on your local grocery shelf.

Of course there is a plethora of tapas available and you can’t forget the famous Serrano and Iberico hams with their hooves still attached that are always on display. Paper thin sliced traditional bone-in serrano ham has been hung up to cure for 6 to 18 month depending on climate and the size of the ham.  The drying sheds (secaderos) are usually built at higher elevations, which is why the ham is called mountain ham. The result is a luscious, melt in your mouth, delicately flavoured ham that is displayed on a jamonero (ham holder) and sliced to order.  The hoof is typically clamped high at one end with the ham cradled at the other for ease of slicing.  It makes for quite a display.

Another wonderful end to a day in Barcelona.  Join me in a plate of tapas!