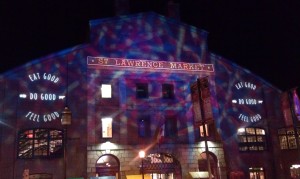 It’s Mmmarket night and the lineup is wrapped around the building.  At the time that I purchased my ticket, I was informed that 1,000 tickets had been sold.  It certainly looks that way, and possibly even more.  Excitement is in the air as everyone waits in anticipation for the doors to open for the inauguration of what will likely (hopefully) be an annual event.  I thought I would wait and not arrive early but I was wandering in the area before the doors opened and noticed a huge line was already queued up.  I hurry over and find myself around the side of the building and half way down the length of the Jarvis side.  This promises to be a most successful event indeed!

In 1803 Lieutenant Governor Peter Hunter issued a proclamation that all the land north of Front, west of Jarvis, south of King and east of Church Street be officially designated as the “Market Block”.

The local civic government occupied temporary offices in the original market building which stood on the south-west corner of King and Jarvis.  It was later built up to include all the municipal offices and Police Station #1, with jail cells in the basement.

As early as 1850, when the building was only 6 years old, civic reports included complaints and recommendations to alter the building.  Shops were too small and flooding in the basement forced prisoners to be knee-deep in water.  At that time the building backed onto Lake Ontario and was located among the wharves and docks of the harbour.

In 1899 the building was altered almost beyond recognition to create a much larger market as the city had exploded from 22,000 people in 1844 to more than 200,000.  In 1971 a planning board suggest completely demolishing the building but, fortunately, a public meeting revealed tremendous support to preserve it.

Since 1901, the south St. Lawrence Market has been known for the variety and freshness of its fruits, vegetables, meat, fish, grains, baked goods, dairy products and restaurants. Today, the market is home to more than 50 specialty vendors and 120 merchants, farmers and artisans.  Visitors are provided with a unique and lively atmosphere of an authentic farmers market and quick service restaurants serving up everything from Greek, Portuguese, Latino, Ukrainian, Italian, Chinese, Japanese and Raw cuisines.

The Market Gallery (previously the Council Chambers) is now used as an exhibition facility to showcase the City’s extensive archival and art collections.  Few people realize that Toronto’s original City Hall was part of the south market building.

The Market Kitchen is a cooking school and is located on the west mezzanine.  Fully equipped with state of the art appliances provided by Miele, it’s a wonderful venue for events, celebrations and corporate functions.  For more information, contact kitchen@stlawrencemarket.com or 416.392.0028.  I will most definitely be checking the schedule to attend cooking classes in the future.

In April of this year, the St. Lawrence Market earned the title of World’s Best Food Market, by National Geographic.  The Toronto landmark beat out a host of tasty competition including New York’s Union Square Greenmarket and London’s Borough Market. Click on CTV NEWS to savour the win and enjoy the full article by CTV News.

Now back to our story… 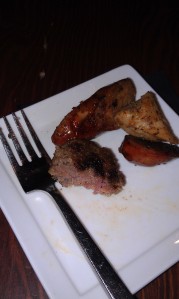 I stop for Champagne samples from the Ontario Wines booth.  They carry wines from Peller Estates, Hillebrand, Thirty Bench and Wayne Gretzky… yum.  A good thirst quencher.  At only $24.95, the Trius Brut Hillebrand has a reasonable price point for a very tasty bubbly. It’s a great idea for a hostess gift during the upcoming holiday season.  I will likely pick up a couple bottles to make mimosas at Christmas brunch that my younger sister will be hosting this year. 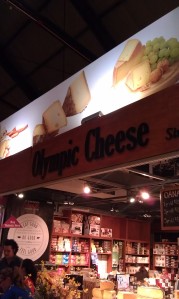 I even catch a glimpse of Chef David Adjey before he was swallowed by the crowd and then suddenly disappeared, never to be seen for the rest of the evening.  Not that I was hunting for him (honestly).  I have never been a celebrity hound (truthfully).  There was just too much to be seen and taste. 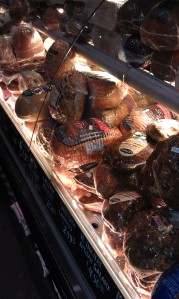 Both levels of the market were open to the crowds.  In the bottom level there was sushi, dim sum, chocolate truffles, crepes, honey at Honey World (their thyme honey drizzled on St. Agur blue cheese is divine), vegetarian tacos at Manotas Organics & Latin Foods, coffee, juice bar delights and raw food bites.

Fortunately for me none of the vendors had their doors open for sales but that’s really not much of a deterrent when the market is so accessible.  Juggling a plate, fork and a glass of wine made it difficult to take many photos, especially since there were not many surfaces available for plate and glass.  Note to self: Bring small digital camera and hang from wrist at all times and drag a friend to the next event so I can eat AND take more pics. I was just barely able to grab my cell phone to snap a photo of Chef Adjey before he disappeared.

Councillor Pam McConnell  welcomed everyone and let us know that over 1,200 tickets were sold.  Thank you all for attending.

Next came Debbie Field, Executive Director at FoodShare with an explanation of what the foundation has achieved and to thank everyone for being there.

Last to speak was Robert Biancolin, co-owner of Carousel Bakery & Sandwich Bar, who has been in the market for at least 35 years and spoke of the history. Their father originally operated a butcher business and when Carousel became available, the Biancolin family took it over. Carousel makes the best peameal bacon sandwich and butter tarts.

Did you know that it was William Davies, who immigrated from England in 1854 and set up shop in the St. Lawrence Market, who came up with the way to cure peameal bacon in 1875 and went on to form the William Davies Company. The forerunner of Canada Packers merged with several other meat packers to form the huge food processing company now known as Maple Leaf Foods.

4 artists – 20 minutes – a blank canvas with your primary colours, painting to a quartet of classical musicians… and they’re off!!

They are four very different, talented artists.  The crowds are gathering, circling the artists like sharks to get a better view of their progress.  The artists are focused, inspired, charcoal outlines, brushes filling in the canvas with masterful strokes of paint.

The crowds are moving in closer, flashes of cameras and cell phones… the intensity on the faces or the artists is increasing as the clock ticks down the final minutes.…  4 minutes….  2 minutes…. 1 minute… and the last few seconds are gone. 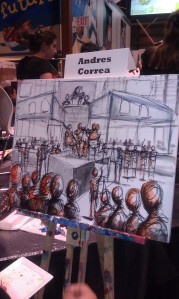 Paint brushes are down and the voting has begun. Guests received a ballot when they arrived and now have the opportunity to put them in the container at the artist of their choice.  It’s going to be a tough decision for me as there are four very different styles.  The art pieces will also be auctioned off with proceeds going to FoodShare Toronto.

And the winner is…. Carlos Delgado! Congratulations !!

Which one would you have voted for?

It’s now time to head back home, over-stuffed with food and a lovely burlap shopping bag as a parting gift.  Well done FoodShare and the St. Lawrence Market!  Hats off and kudos to everyone who organized, worked at, participated, and volunteered to make the first Mmmarket Night a resounding success!

Visit the St. Lawrence Mmmarket with me and explore the culinary possibilities!!

2 thoughts on “Local Event – Mmmarket Night is a Resounding Success!!”