The countdown has begun for one of the world’s most prestigious culinary competitions, the Bocuse d’Or.  Considered to be the “Gastronomic Olympics”, chefs from around the world prepare for this gruelling battle that takes place every two years in Lyons, France.

Each country holds their own competition to decide which of their respective top chefs will be worthy of representing them at this elite encounter.  On January 29-30 the very best chefs from 24 countries will gather for the most demanding battle in the culinary world. These will be the most important 48 hours for most, if not all, of the participating chefs as the one who is presented with the golden trophy will become a superstar.  For everyone attending it will be an intense 2 days that will literally change their lives.

How and why was this competition created? 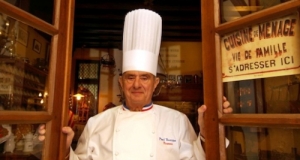 The Bocuse d’Or was founded in 1987 by legendary French Chef, Paul Bocuse and Albert Romain, organizer of the trade exhibition. Their vision was to create a competition that would bring the greatest chefs out of the kitchens and onto the world stage. They wanted to give the world the opportunity to see these great chefs at work.

Qualifying for the Competition

Chefs can only participate after winning a qualifying competition in their own country so that only the very best gather in Lyon. Each participating country sends one chef and their apprentice, who must be 22 years of age or younger, and a judge. This year’s participating countries are:  Australia, Belgium, Brazil, Canada, China, Denmark, Estonia, Finland, France, Guatemala, Hungary, Iceland, Italy, Japan, Mexico, Morocco, Netherlands, Norway, Singapore, Sri Lanka, Sweden, Switzerland, United Kingdom, United States.

The Prizes and Awards

A gold, silver and bronze Bocuse trophy and cash prizes are awarded to the top three competitors. The Gold Bocuse winner receives 20,000 Euros; the Silver Bocuse winner receives 15,000 Euros; and the Bronze Bocuse winner receives 10,000 Euros. In addition, prizes are awarded for the best fish and best meat dishes (outside of the top three places), best apprentice and best poster. The Bocuse d’Or trophy was designed by Christine Delessert and features Paul Bocuse standing on top of the world. On the day following the competition the three winners meet at Paul Bocuse’s restaurant in Collonges where plaques engraved with their names are fixed at the entrance of his restaurant.

Since the first Bocuse d’Or in 1987, this competition has evolved but the general rules have remained unchanged: produce the most exquisite dishes with the best ingredients available.  Not only do the results have to taste fantastic, they must be a feast for the eyes and push the boundaries of epicurean innovation. 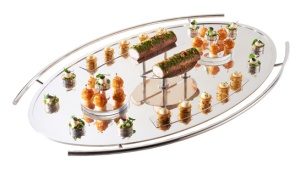 This year marks a breakthrough in the Bocuse d’Or competition with an important element of surprise.  The day before the competition, the contestants will discover the ingredients they can use to accompany their fish dish. Just like on a market, each candidate will have to choose its products among a large selection of seasonal fruits and vegetables.

Another 2013 change: the fish dish must be presented and served to the jury on a plate instead of the huge platters that teams have typically used in the past.  This will allow competitors to showcase their offerings in a more realistic presentation for the judges and heightens the challenge for the competitors.

Chef Alex Chen, representative for Canada, is about to discover the thrill of this highly anticipated contest. 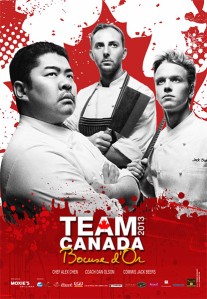 Chef Alex Chen (on the left)

Twenty-four master chefs presenting the best of their talents to 12 judges before an international audience both live in studio and televised.

What I wouldn’t give to have a ticket to that show!

Check your local television listings and tune in to see what they produce and who wins or watch on line and the teams compete.  (Note: All photos in this post are from the Bocuse d’Or website and the Auberge du Pont de Collonges website.  Hopefully I will be able to take my own pics in front of the restaurant myself.)